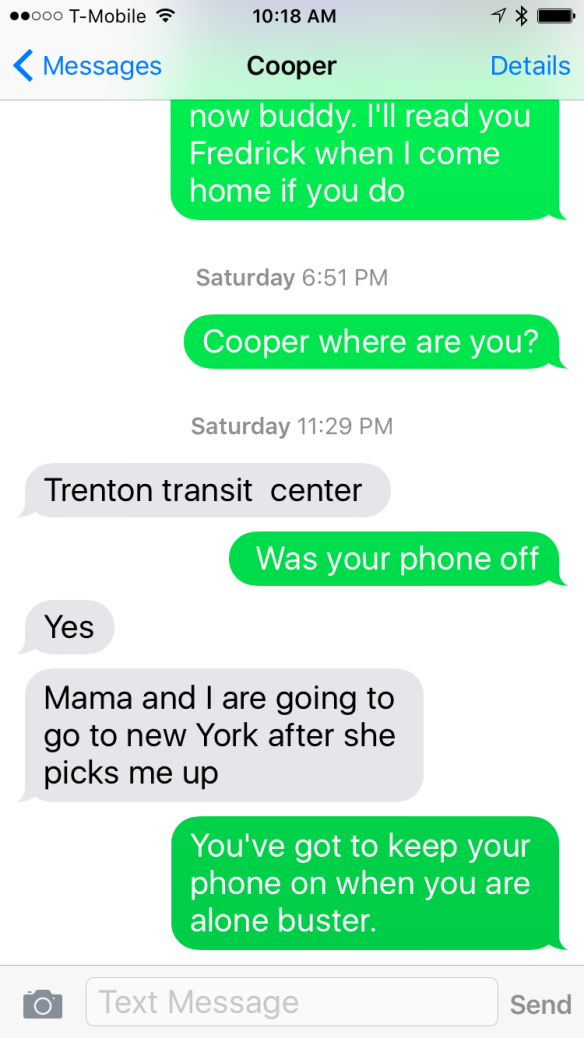 As many of my work colleagues, friends on Social Media, New Jersey police & Transit Police know my 11 year old son Cooper went missing this past Saturday for six hours. For many people this isn’t a surprise; I mean semi regularly Doreen, my wife, posts an “on the look out for Cooper” on her Facebook page. It is such a common sentiment that recently I went to get a cup of coffee at a local vendor, The Able Baker, and the woman helping me introduced herself as being part of the “Cooper look out team.” How awesome is that? I must give a shout out to the wonderful citizens and employees in our town who definitely keep a watchful eye out for my son. So why was this Saturday evening any different?

For those of you who don’t know my son suffers from autism. High functioning thank God, but as any parent of a kid on the spectrum can tell you, its a real thing! There are certain givens with Cooper: He adores NJ Transit, he desires many objects (often found in my shopping cart on Amazon is a Pokemon card or a plush toy), He loves to be on the go (and has had several bikes stolen in the process), He would like to go to NYC with me everyday if he could, He is passionate about eating at the diner and going to the ice cream store. So this last Saturday when he went to skate in the park just before 4:00 in the afternoon equipped with his cell phone and a plan to meet Doreen and his sister’s at the diner at 5:00 for dinner and then a stop by the ice cream shop it seemed like a lock. Doreen and I were babysitter ready with plans to attend the late show of Rita Wilson’s concert at the Cafe Carlyle that night; Doreen was perfectly priming the kids so her meeting me after my show would be a non event. Cooper never showed up at the diner or the ice cream store. His phone went straight to voice mail and texts were not being responded to. Doreen phoned to tell me he was missing at 7:00 in case he showed up at my work, which he has in the past. The Maplewood Police department and NJ transit Authority were informed in short order. As the night wore on the fact that Coop missed the diner and hadn’t called Doreen started to bother me more and more. By 9:00 terrible thoughts were racing through my mind and I just said many o’ prayer as the An American In Paris Orchestra continued to play and the performers went about their magic. By 9:30 Doreen and I were abandoning our anniversary plans, both of us bereft with worry, her trying to keep her fear from our girls while I tried to keep mine from my co-workers. Then at 10:10 I received word from a train conductor friend, Andre, that one of his conductor friends saw Cooper on the train that afternoon saying he was going to Trenton. Within minutes of this information coming in to me and Stairway to Paradise wrapping up onstage at the Palace Theatre Doreen got a call from the Trenton Transit Center that Cooper was there and needed to be picked up. Relief and exhaustion set in immediately!

I arrived home from work at midnight and sent our “date-night” baby sitter on her way and Doreen and Cooper rolled in at 1:30 in the morning. An extremely cuddly Cooper with nary a care in the world and a ticket for the SEPTA train in his hand comes up and rubs his face gently against mine. I took a serious tone, looked Cooper in the eye and said, “Buster, you simply cannot do that again. Mama and I were terrified that something horrible had happened to you. Your phone turned off. No more Cooper!” Coopers very sincere response was, “I wanted to go to Atlantic City and get a hotel room and come home tomorrow but it got too late to get a train.” Um… speechless.

We do the required take-aways from Coop’s freedoms and treasured stuff to try to make him understand the severity of the situation but the fact of the matter is Cooper is going to understand everything until the next time he is instantly taken by a need to journey. Cooper is a generally well mannered young man full of charm and an extra helping of life with a penchant to be on the move. So we have armed him with GPS tiles (thank you Apple) that will locate him wherever free wi-fi is available and added trackers to his phone that will work if it is on or not (thank you t-mobile) but the best we can arm him with is knowledge of people good & bad and an incredible network of friends that have his sweet back… that said, I will continue to pray!

3 thoughts on “The Cooper Conundrum”